James Engle enters into the Titan Senior Spotlight.  James was a newcomer to the tennis team. A talented writer and journalist, James brought athleticism and versatility to a lineup that needed depth. In his brief stint with Shaler Tennis, James established himself as a versatile and reliable player who could contribute in a variety of ways. Boys Tennis Head Coach Brian Duermeyer said of James, “He was new to Shaler tennis, but it was obvious early on that he would have brought depth, athleticism, and leadership to our squad. I’m thankful to have met James and am impressed by how well rounded he is as a student athlete.”  James’ prowess for writing will lead him to Penn State University, where he will major in journalism. 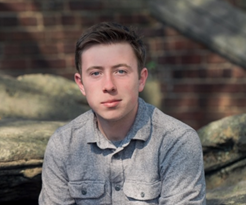