The Shaler Area Athletic Teams had unbelievable success for the 2018-19 school year.  A return to true Titan Pride.

-The Boys & Girls Cross Country Team had a great year with both a female and male runner garnering WPIAL medals, Samantha Hennen and Dalton Kalbaugh with Dalton placing high enough to earn a trip to Hershey for the PIAA state finals.

-The Girls Golf Team has an outstanding year garnering their first five wins as a program.  Emilee Miller, only a sophomore was outstanding as well earning a trip to the WPIAL Finals, after excellent play in the Sectional Finals.

-The Girls Tennis Team continues to show improvement in a very tough section.  Led by number one player Lydia Valentine the team came up just short of a playoff appearance.

-The Boys Basketball Team went where they had not gone for many years, the state playoffs.  After a rigorous regular season finishing 16-9 and third in their section.  They went on to WPIAL playoffs and then into the state playoffs losing a tight game to Meadville.  Justin DeSabato and Mekhi Reynolds were named All Big 56 1st team, Matt Bendel and Brennan Fugh Honorable Mention.

-The Girls Basketball Team came up a little short of the playoffs but had several players named to the All Big 56 Teams.  Emily Cavacini 1st Team, and Meghan Lacey Honorable Mention.

-The Varsity Wrestling Team although not making sectional playoffs had some individual successes.  Ian Scarberry was able to capture his 100th career win.  Ryan Sullivan defended his sectional title but was unable to continue breaking his hand in the process.  Ryan also was named Honor Mention Wrestling USA All American Team despite his inability to defend his PIAA State Title.

-The Boys Bowling Team had an outstanding year finishing with a record of 5 wins and 2 losses and claiming third place in their section.

The Boys Swimming Team had an outstanding year ending the year with a 9-2 record.  The following swimmer did well enough to qualify for the WPIAL Championships Justin Adametz, Stephen Adametz, Eddie Sheets, Peter Lesnett, Kevin Chalmers, and Jake Bacasa.

The Girls Swimming Team ended the year with a 8 win and only 3 loss record.  The team also was able to advance five girls onto the WPIAL Championships; Jenna Stanton, Isabella Cercone, Olivia DiBon, Lydia Nebiolo, and Virginia Lesnett.

The Indoor Track Team had a super year with two athletes making it to the PA State Indoor Championships:  Cam Mbalo and Dalton Kalbaugh.   Cam placed 7th and Dalton 11th in their respective events.

-The Unified Bocce Team hit unbelievable heights:  The team, only created two years ago and unable to garner a win the first year, went on to capture the entire Allegheny County Championships and a trip to Hershey to compete for the State Championship.  The team was honored not only by their school, but the Shaler Area School Board, and Allegheny County Commissioners as well.

-The Varsity Baseball Team made history.  Taking 20 years and a lot of effort the baseball team was able to again capture a WPIAL title.  Playing within a very competitive section, the team was up and down at times during the season but played well enough to place 2nd in the section and earn a spot in the WPIAL playoffs.  It is from this point the team exploded doing enough to just keep winning and earning the programs fifth WPIAL Title.   Several members were named to Big 56 Teams:  Hunter Boyan 1st Team pitcher, Zach Hernon 2nd Team infielder, and Colin Harger 2nd Team outfielder.

-The Varsity Track Team had some real success in 2019.  The teams were able to capture a few team wins during the season, and individuals showed great growth through the season.   Danielle Eschelman, Mayah Charity, Lydia Valentine, Cam Mbalo, Jack Keenan, Dalton Kalbaugh, and Andrew Dadowski all earned spots to compete at the WPIAL Championships.  At these championships Danielle Eshelman and Cam Mbalo were, outstanding with Danielle earning 6th and 12th place finishes, and Cam winning a WPIAL Title and a trip to Shippensburg University for the PIAA State Championships.  Here Cam jumped outstanding again garnering a bronze medal and a trip to New Balance Nationals in Greensboro, NC.

–The Boys Varsity Volleyball Team had a record-breaking season.  A team with no seniors continued to get better and better as the season went along.  By the end of the year they had secured a playoff spot and a first round bye.  Advancing to the semi-finals the team lost a close match to Bethel Park and then won the consolation finals against Latrobe to earn a spot in the PIAA State Playoffs.  There the team defeated D-10 Champion Erie McDowell before losing a tough quarterfinal match against North Allegheny.  Several members of the team earned individual recognition: Billy Dadowski and Steve Hoffman were 1st Team All-Section and 1st Team All-WPIAL, and Jon Kenst was 2nd Team All-Section and  3rd Team All-WPIAL, Trapper Crain and Thomas Borgen were 2nd Team All-Section.

-The Girls Lacrosse Team was still very young with only one senior but was able to continue it growth, crushing several teams later in the year, and closing the gap with teams they had lost to earlier in the season ending the year with a 6-10 record and winning 3 of the final four games.  Rylee Wilson led the team with 41 goals.

-The Boys Lacrosse Team also very young, starting several freshmen showed progress throughout the year and able to garner 3 wins during the season.

-The Boys Tennis Team continued its march towards success with a year long record of 7 wins and 7 losses.  The team continues to show growth and adding more victories every year.  The team was led by Cam Szazynski who played in the number one spot.

-The Shaler Athletic Website has earned the top spot in the state of PA for Varsity New Network for views and top 25 in the nation of over 500 schools.  The webpage is now averaging over 30,000 views a month, and surpassed 50,000 in April and May.

These are just some of the hundreds of great accomplishments for the Titan Athletic Program, many of which we could not acknowledge here.  If there were any mistakes or omissions it was not purposeful, and we are all proud of all of our athletes commitment, effort, and determination. 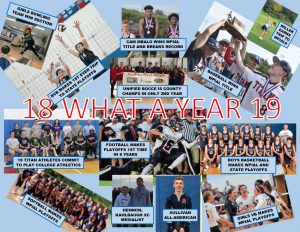